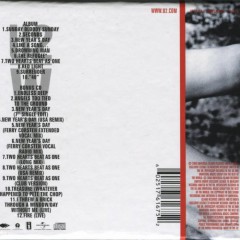 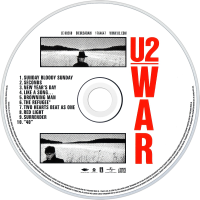 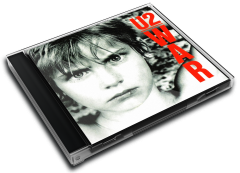 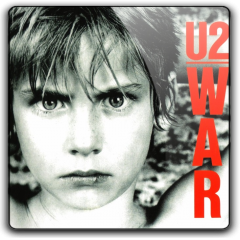 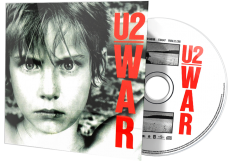 War is the third studio album by Irish rock band U2, released on 28 February 1983. The album has come to be regarded as U2's first overtly political album, in part because of songs like "Sunday Bloody Sunday", "New Year's Day", as well as the title, which stems from the band's perception of the world at the time; Bono stated that "war seemed to be the motif for 1982."
While the central themes of their earlier albums Boy and October focused on adolescence and spirituality, respectively, War focused on both the physical aspects of warfare, and the emotional after-effects. Musically, it is also harsher than the band's previous releases. The album has been described as the record where the band "turned pacifism itself into a crusade."
War was a commercial success for the band, knocking Michael Jackson's Thriller from the top of the charts to become the band's first #1 album in the UK. It reached #12 in the U.S. and became their first Gold-certified album there. War has received critical acclaim. In 2012, the album was ranked number 223 on Rolling Stone magazine's list of "The 500 Greatest Albums of All Time".
U2 began recording War on 17 May 1982. The band took a break soon afterwards, as newlyweds Bono and Ali honeymooned in Jamaica. It has been noted that it was not a typical honeymoon, as Bono reportedly worked on the lyrics for the upcoming album. The lyrics to "New Year's Day" had its origins in a love song Bono wrote for his wife, but the song was reshaped and inspired by the Polish Solidarity movement.
The album's opener, "Sunday Bloody Sunday", an ardent protest song, stems from a guitar riff and lyric written by The Edge in 1982. Following an argument with his girlfriend, and a period of doubt in his own song-writing abilities, The Edge - "feeling depressed... channeled fear and frustration and self-loathing into a piece of music." Early versions of the song opened with the line, "Don't talk to me about the rights of the IRA, UDA". After Bono had reworked the lyrics, the band recorded the song at Windmill Lane Studios in Dublin. The opening drum pattern soon developed into the song's hook. A local violinist, Steve Wickham, approached The Edge one morning at a bus stop and asked if U2 had any need for a violin on their next album. In the studio for only half a day, Wickham's electric violin became the final instrumental contribution to the song.
During the sessions for "Sunday Bloody Sunday", producer Steve Lillywhite encouraged drummer Larry Mullen, Jr. to use a click track, but Mullen was firmly against the idea. A chance meeting with Andy Newmark (of Sly & the Family Stone) - a drummer who used a click track religiously - changed Mullen's mind. Mullen used the click track to stay in time for other songs on the album. Mullen said of the album in a 1983 interview, "I think the drumming has always been pretty simple, I don't think it needs to be flashy. For War I use a click track, something I haven't used before, it's a way of keeping time in my headphones. When I listened to the music in time with the click track I knew I had to bring it down to the real basics. Hopefully for the next LP it will be more complicated, I'll move on. I think of it as a musical progression for myself because I learned a lot recording this album, just about my own style and that's what I wanted to do. I think there is a definite style on War where there isn't on the previous albums."
The studio version of "40" was recorded right at the end of the recording sessions for War. Bassist Adam Clayton had already left the studio, and the three remaining band members decided they didn't have a good song to end the album. Bono, The Edge, and Mullen Jr. quickly recorded the song with The Edge switching off to both the electric and bass guitar. Bono called the song "40" as he based the lyrics on Psalm 40. In live versions of the song, The Edge and Clayton switch roles, as Clayton plays guitar and Edge plays the bass.
Three of the tracks featured backing vocals by The Coconuts, of Kid Creole and the Coconuts. In the words of Steve Lillywhite, "they just happened to be in Dublin on tour, so we hung out with them and they came in and sang on "Surrender." So it was sort of random - this serious Irish rock band having the Coconuts on their album."
The album was titled War for several reasons; in 1982, Bono said that the album was called War because "War seemed to be the motif for 1982," adding that "Everywhere you looked, from the Falklands to the Middle East and South Africa, there was war. By calling the album War we're giving people a slap in the face and at the same time getting away from the cosy image a lot of people have of U2." The Edge said that "It's a heavy title. It's blunt. It's not something that's safe, so it could backfire. It's the sort of subject matter that people can really take a dislike to. But we wanted to take a more dangerous course, fly a bit closer to the wind, so I think the title is appropriate."

User Album Review
In 1982, back before world leaders were being brow-beaten by Bono, U2 were teaming up once again with Steve Lillywhite (who’d produced their debut, Boy, and October) for a crack at their third album. Whilst there’s no denying the youthful energy and industrial quantities of testosterone on display, it’s something of a mixed rattlebag that highlights the pros and cons of the band. After a while all that breathless beseeching, fiery indignation and BIG guitar heroics grows a tad wearisome; a bit like being shouted at by someone who means well but doesn’t know when to turn the volume down.
The palette broadens on “Red Light” with backing vocals from Kid Creole’s Coconuts no less, and some equally superfluous trumpet - the latter making a tokenistic jazz noise atop the impervious surface of the band’s default setting, that only loosens up enough to work effectively by the time the track is fading-out.
Similarly the hurtling ardour of singer and guitarist going at it full-tilt on “Like A Song”, becomes interesting only when it threatens to spill over into the thunderous rumble of Larry Mullen’s drumming. By then though, the faders are sliding into zero. More effective contributions arise from Steve Wickham’s soaring violin as it weaves around chiming harmonics and multi-tracked acoustic guitars of “Drowning Man.” ”“ something the Eno-produced James would emulate the following decade. His stirring violin also heats up the anthemic “Sunday Bloody Sunday”, a rough-hewn stomp that falteringly navigates its way between posture and politics.
For all the evident unevenness, you can’t knock the sure-footed pure power-pop of “Two Hearts Beat As One” and “New Years Day”. Though Adam Clayton’s bass line had an unlikely genesis (he was trying to play the Visage hit, “Fade To Grey”), it’s reverberations set off a chain reaction of exultant flag-waving around the world. Though War explores some of the glassy sonics which The Edge would later perfect, it falls short of the musical maturity they were to find with their 1984 studio follow-up, The Unforgettable Fire.