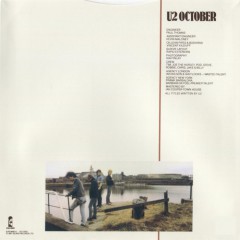 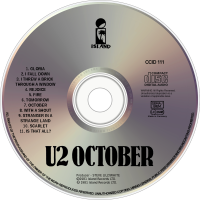 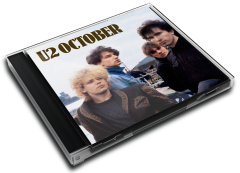 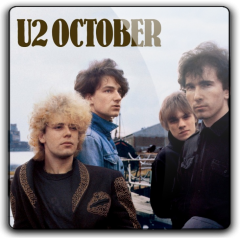 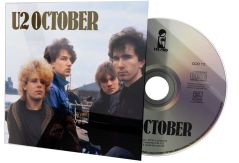 October is the second album by Irish rock band U2, released in 1981. The album featured spiritual themes, inspired by Bono, The Edge, and Larry Mullen, Jr.'s memberships in a Christian group called the "Shalom Fellowship", which led them to question the relationship between the Christian faith and the rock and roll lifestyle. The album received mixed reviews and limited radio play.
After completing their Boy Tour in February 1981, U2 began to write new material. ("Fire" had already been recorded at Compass Point Studios in the Bahamas while U2 took a break from the Boy Tour.) They wrote part of October during an extended sound check at First Avenue in Minneapolis. The band entered the studio in July 1981 to record October, but the album's recording sessions were complicated when the briefcase containing Bono's lyrics was stolen by fans after a show in Portland, Oregon. The band already booked studio time through the end of August and thus had to continue recording in spite of this, even improvising lyrics on some songs. Bono said of the recording process of October, "I remember the pressure it was made under, I remember writing lyrics on the microphone, and at Â£50 an hour, that's quite a pressure. Lillywhite was pacing up and down the studio... he coped really well. And the ironic thing about October is that there's a sort of peace about the album, even though it was recorded under that pressure. A lot of people found October hard to accept at first, I mean, I used the word 'rejoice' precisely because I knew people have a mental block against it. It's a powerful word, it's lovely to say. It's implying more than 'get up and dance, baby.' I think October goes into areas that most rock 'n' roll bands ignore. When I listen to the album, something like 'Tomorrow,' it actually moves me." The briefcase was eventually recovered in October 2004, and Bono greeted its return as "an act of grace".
The record placed an emphasis on religion and spirituality, particularly in the songs "Gloria" (featuring a Latin chorus of "Gloria, in te domine"), "With a Shout (Jerusalem)", and "Tomorrow". About the album, Bono declared in 2005: "Can you imagine your second album-the difficult second album-it's about God?".
The songs mainly refine U2's formula of riff-rockers with songs such as "Gloria" and "Rejoice", but the band also expanded its musical palette in a few ways. In particular, guitarist The Edge incorporates piano in songs such as "I Fall Down", "Stranger In a Strange Land", "Scarlet", and "October". "Tomorrow", a lament to Bono's mother, who died when he was young, features Uilleann pipes played by Vinnie Kildruff later of In Tua Nua. "I Threw a Brick Through a Window" was one of the band's first songs to highlight drummer Larry Mullen, Jr., while "Gloria" highlights bassist Adam Clayton as it features three styles of playing in one song (using a pick for the most part, playing with fingers during the slide guitar by The Edge, then a "slap & pop" solo towards the end).
"Is That All?" borrows the riff from "Cry", an older song the band has used as an introduction to "The Electric Co." live.

User Album Review
October proves that even the mighty U2 were subject, long ago, to the difficult second album syndrome. During its recording both Bono and The Edge left the band temporarily, the album's original lyrics were pilfered before recording could commence, and this while the band were still on a very limited budget. As such it stands as a testament to the four-piece's tenacity, if not to their ability to judge their audience's tastes.
October concerns itself in the main with things spiritual. All band members except Adam Clayton were avowed Christians and at this point the singer and guitarist still held doubts as to whether one could rock and get up close and personal with Jesus (hence the temporary exit). In the end they decided it was possible and as a result the album isn't shy with its references to rejoicing and exultation. The album's only hit, Gloria, even came complete with a Latin liturgical chorus. It was all fuel to the fire of detractors who objected to such bare-faced sanctimoniousness. Luckily material such as I Threw A Brick Through A Window and the title track, bolstered by Steve Lilywhite's production, was still in a class of its own.
The aforementioned lost lyrics caused tension as the studio meter was ticking while they had to be improvised/remembered, but this also led to some intriguing subconscious trickle-through. It was only later, he admitted, that Bono realised that Tomorrow was about the death of his mother.
Sonically the band was in a holding pattern. The widescreen textures that were to lift the next opus, War, were learned by a resolute approach to touring where, despite, the poorer sales of this album, the band kept the flame of their burgeoning fan base alive. October remains their least favourite offering, but still stands as a fine document of a band finding its legs.