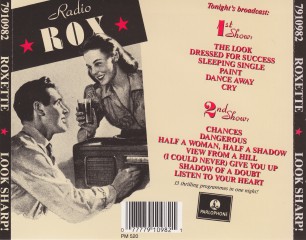 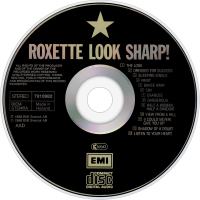 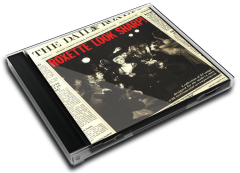 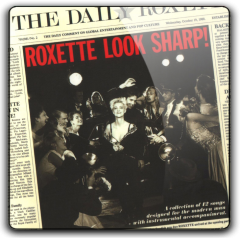 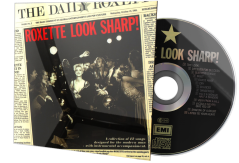 Look Sharp! is the second studio album by the Swedish pop and rock duo Roxette.
It was recorded at EMI Studios in Stockholm between March and June 1988 and at Trident II Studios in London in June 1988. The album was released on October 19, 1988, two years after their debut Pearls of Passion, and became a worldwide bestseller. Look Sharp! is often considered as Roxette's breakthrough.

The album has sold over 9 million copies worldwide.

"The Look", "Chances", "Dressed for Success", "Listen to Your Heart" and "Dangerous" were released as singles. In native Sweden, "Dressed for Success" and "Listen to Your Heart" were chosen as the first two singles, as Gessle and EMI Svenska chose to highlight Fredriksson's singing. The singles reached #2 and #3 on Swedish chart respectively. But despite huge popularity in their homeland Roxette were still unknown globally.

Everything changed when the third single "The Look" was released in Sweden. It was while studying in Sweden, that an American exchange student from Minneapolis, Dean Cushman, heard "The Look", and brought a copy of Look Sharp! home for the 1988 holiday break. He gave the album to a Minneapolis radio station, KDWB 101.3 FM. The station started playing "The Look" and based on positive caller feedback, the song became very popular, and quickly spread to other radio stations. The song became a radio hit before any Roxette music had been commercially released or promoted in the US market. The story was covered by radio, newspapers and TV in the US and in Sweden, making for good press for many years, with Gessle telling this as the story which highlighted the beginning of their international success.

Until 2009 Look Sharp! has sold over 9 million copies worldwide including over 1 million copies in US alone, which gave the album platinum certification by RIAA in January 1990 (it has sold 402,000 since Nielsen SoundScan began tracking data in 1991). Look Sharp! peaked at #4 in UK, where it stayed on the charts for 53 weeks and was certified platinum by BPI in the UK in December 1990 for sales in excess of 300,000. It is also the second best selling album in Swedish music history (only behind ABBA's Arrival)[citation needed] where it held the top spot for 14 weeks and has gone 6x platinum. Furthermore Look Sharp! collected gold and platinum certifications all around the world.

The CD edition of the album features the track '(I Could Never) Give Up' which was omitted from both the cassette and vinyl editions. 'Chances' is also 40 seconds longer.