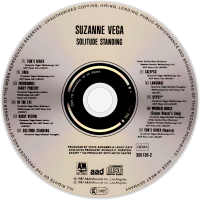 Solitude Standing is the second album by singer-songwriter Suzanne Vega. Released in 1987, it is the most popular and critically acclaimed of her career. As can be seen by the CD insert, many of the songs had been written prior to 1987.
Song notes:
-"Tom's Diner" was included twice on the album with its a cappella vocal as the first track and its instrumental version as the last track.
-"Night Vision" was inspired by the poem "Juan Gris" by Paul Éluard.
-"Calypso" is based on The Odyssey, namely the part in which Calypso is forced to let Odysseus go.
-"Gypsy" is mentioned in the book The Perks of Being a Wallflower by Stephen Chbosky, in which the main character Charlie includes it on one of his mixtapes.