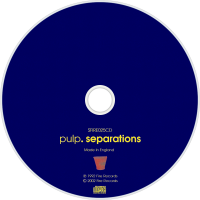 Separations is the third album by British alternative rock band Pulp. Recorded in 1989, it was belatedly released in 1992 on the independent record label Fire Records. The songs on the second half of the album are in an experimental acid house style, while the first half contains songs more typical of Pulp.
The album was reissued and remastered by Fire Records in 2012 along with 1983's It and 1987's Freaks. This re-release took several delays as the first stated release date was 8 August 2011 while the albums finally came out on 13 February 2012. During than period the information that the albums would be remastered was stated and new bonus tracks were added to the track listing. The reissue also includes new artwork and liner notes from music journalist Everett True.
This re-release gives an opportunity to hear "Death Comes To Town" which was previously released in 2005 only on CD that accompanied Sheffield journalist Martin Lilleker's book Beats Working For A Living. This 22-song CD featured rare tracks from some of the bands featured in the book.
"Death Goes To The Disco" and "Is This House?" are remixes of "Death Comes To Town" and "This House Is Condemned" accordingly.
The bonus track "Is This House?" on 2012 edition is labeled incorrectly. This track is taken from "My Legendary Girlfriend" single, where two remixes of the song "This House Is Condemned" by Parrot & Winston can be found, but it is in fact the remix titled simply "This House Is Condemned (Remix)"