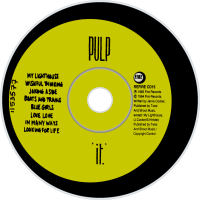 It is the first album by British pop band Pulp. Originally given a limited vinyl release of 2000 copies in April 1983, it was re-released on CD by Cherry Red in February 1994 with three bonus tracks ("Everybody's Problem", "There Was..." and "Looking for Life"). A further CD re-release in November 1994 by Fire Records removed "Everybody's Problem" and "There Was...".
The album was reissued and remastered by Fire Records in 2012 along with 1987's Freaks and 1992's Separations. This re-release took several delays as the first stated release date was 8 August 2011 while the albums finally came out on 13 February 2012. During that period it was announced that the albums would be remastered and new bonus tracks would be added to the track listing. The reissue also includes new artwork and liner notes from music journalist Everett True.
The album's odd title is in fact a deliberate pun, as when it added to the name of the band it spells the word "Pulpit".