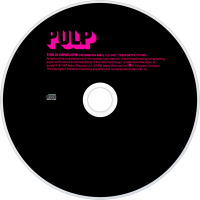 This Is Hardcore is the sixth album by English band Pulp, first released in March 1998. It came three years after their breakthrough album, Different Class, and was eagerly anticipated. As with the previous album it reached number one in the charts, and was well received critically, earning Pulp a third successive nomination for the 1998 Mercury Prize. A subsequent release in the UK later in 1998 came with a bonus live CD entitled "This Is Glastonbury". A deluxe edition of This Is Hardcore was released on 11 September 2006. It contained a second disc of B-sides, demos and rarities.
The cover photo was art directed by Peter Saville and the American painter John Currin who is known for his figurative paintings of exaggerated female forms. The images were further digitally manipulated by Howard Wakefield who also designed the album. Currin was also the art director for the "Help the Aged" video, based on his painting "The Never Ending Story." Advertising posters showing the album's cover that appeared on the London Underground system were defaced by graffiti artists with slogans like "This Offends Women" and "This is Sexist" or "This is Demeaning".
The music video for the title track was directed by Doug Nichol and was listed as the #51 best video of all time by Stylus Magazine.