You Get What You Give 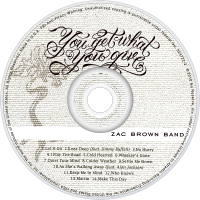 The Zac Brown Band's first major-label release, 2008’s The Foundation, put this hard-working touring band over the top, generating five hit singles, including the instant classic singalong “Chicken Fried,” and this follow-up album will get a lot of attention and airplay on country stations. Is there another “Chicken Fried” here? Not really, but You Get What You Give is a better and more consistent album than The Foundation, thanks to Brown’s solid songwriting and singing and the rest of the bandmembers' ability to sound country even when they venture deep into Southern rock territory, tackle a little bluegrass, or veer into a jam band reggae direction -- think George Strait crossed with the Allman Brothers Band crossed with Jimmy Buffett (who actually guests here on "Knee Deep") crossed with the Dave Matthews Band. This is a band built for flexibility at live shows and for stretching numbers out, but thanks to Brown's easy, natural honky tonk singing and sharp songwriting, ZBB also deliver confidently in the tighter restraints of a studio setting. From the opener, the you’re-definitely-gonna-hear-this-on-the-radio “Let It Go,” this set is road-tested and crisp. “Let It Go” is a clear highlight, but so too is the Allman Brothers-like “I Play the Road,” the ragtime two-step sound of “Whiskey’s Gone,” the fast, skittering reggae of “Settle Me Down,” the honky tonk "As She's Walking Away" (featuring a guest spot from Alan Jackson), and the haunting ballad “Martin,” and all of these tracks combined make this a stronger album than The Foundation, even if it doesn’t exactly have a song that’s going to be as huge and commercially feasible as “Chicken Fried” -- instant classics are rare, and they’re supposed to be.