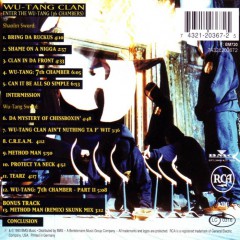 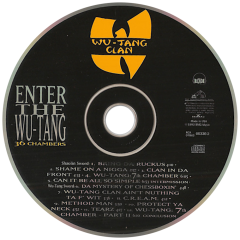 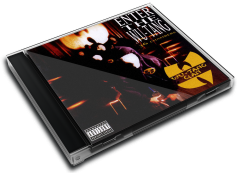 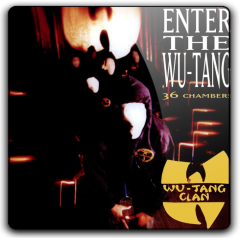 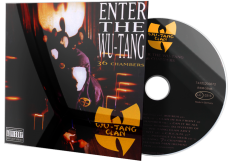 Enter the Wu-Tang (36 Chambers) is the debut album of American hip hop group Wu-Tang Clan, released November 9, 1993, on Loud Records and distributed through RCA Records. Recording sessions for the album took place during 1992 to 1993 at Firehouse Studio in New York City, and it was mastered at The Hit Factory. The album's title originates from the martial arts film The 36th Chamber of Shaolin (1978). The group's de facto leader RZA, also known as Prince Rakeem, produced the album entirely, utilizing heavy, eerie beats and a sound largely based on martial-arts movie clips and soul music samples.

The distinctive sound of Enter the Wu-Tang (36 Chambers) created a blueprint for hardcore hip hop during the 1990s and helped return New York City hip hop to national prominence. Its sound also became hugely influential in modern hip hop production, while the group members' explicit, humorous, and free-associative lyrics have served as a template for many subsequent hip hop records. Serving as a landmark record in the era of hip hop known as the East Coast Renaissance, its influence helped lead the way for several other East Coast hip hop artists, including Nas, The Notorious B.I.G., Mobb Deep, and Jay-Z.

Despite its raw, underground sound, the album had surprising chart success, peaking at number 41 on the US Billboard 200 chart. By 1995, it was certified platinum by the Recording Industry Association of America for shipments of one million copies in the United States. Initially receiving positive reviews from most music critics, Enter the Wu-Tang (36 Chambers) has been regarded by music writers as one of the most significant albums of the 1990s, as well as one of the greatest hip hop albums of all-time. In 2003, the album was ranked number 386 on Rolling Stone magazine's list of the 500 greatest albums of all time.

User Album Review
Imbibe my MTV, but when I desire hip-hop, I spell relief T-H-E-B-O-X. Called Video Jukebox in some regions, this cable station is programmed completely by viewers, meaning you see artists – especially hip-hop artists – who don't often get on the big-brother network. In Brooklyn, N.Y., right now and extending back a few months, the reigning fave is the Wu-Tang Clan, who are to the channel what Guns n' Roses are to MTV.

The eight-man Wu-Tang crew is one of the hottest in hip-hop, but you won't see them on BET's Video Vibrations (the B is for Bourgie) or the cover of any major hip-hop magazine. That's because Wu-Tang make underground rap: low on hype and production values, high on the idea that indigence is an integral part of blackness. This is hip-hop you won't find creeping up the Billboard charts but you will hear booming out of Jeep stereos in all the right neighborhoods.

Underground remains largely uncelebrated, because its rappers come without the glossy packaging that deifies Snoop, Treach and 2Pac. Underground images are crude, and the most distinguishing feature of the music is low-budget-sounding production, a holdover from early-to-mid-'80s rap. It's as though the artists feel that it's not enough to rhyme like have-nots and look like have-nots. They've got to sound like have-nots, too.

Black Moon and Kurious Jorge aren't minimalists, but Enta da Stage and Constipated Monkey are far from the million-dollar sound of Dre, Ali Shaheed Muhammad or Pete Rock. Black Moon – rappers Buckshot Shorty, 5Ft. Excellerator and DJ Evil Dee, all from Brooklyn – got noticed last summer when their jazzy "Who Got the Props?" hit DJ turntables. Buckshot promised, "I'm grab the mic/Flip the script/And leave 'em stunned/Buckshot's the one that gets the job done" – and Enta da Stage has stunned some with the tension between his hard-edge voice and the smooth tracks. But in either trying to be cool or simply not being imaginative enough, the trio's album becomes prosaic. Enta's precisely constructed songs lack the spontaneity to be explosive: If these were paintings, you would be able to see the numbers and the lines.

Many Puerto Ricans influenced hip-hop in the '70s, but until now only California Latinos – B. Real of Cypress Hill, Mellow Man Ace and Kid Frost – have made an impact on the modern game, making Kurious Jorge hip-hop's first major Puerto Rican rapper. With Constipated Monkey's uptempo beats and jazzy horns, Kurious sounds capable of starting a party with every song. Unlike many of his black brothers, Kurious refuses to reduce himself to a stereotype, instead demanding that we focus on getting the jam jumping.

But the most interesting of the undergrounders is, of course, the massive Wu-Tang Clan of Staten Island, N.Y. – Prince Rakeem, a k a the RZA; the Method Man; U-God; Rebel Ins; Shallah Raekwon; Ghost Face Killer; Ol' Dirty Bastard; and the Genius, a k a the GZA. With its dirty, minimalist beats, Enter the Wu-Tang (36 Chambers) sounds more like BDP's classic Criminal Minded than KRS-One's Return of the Boom Bap.

The beats make room for lyrics that focus on urban life, karate and blunts but almost never women. The Wu don't say they "don't love them hos" as Snoop does; they just rarely admit their existence. There is also a ribald skit where they describe the tortures they would like to perform on each other's dicks and assholes, which makes the Wu fraternity sound perversely – and repressively – homoerotic.

Still, underground rap's ignorance of image making leaves a large void in a music in which personality – character, not caricature – is an organic part of the sound, in which the artist is the art. Save the charismatic Method Man, Wu-Tang, Black Moon and Kurious are more ciphers than masterful creations. In refusing to commodify themselves, they leave blank the ultimate canvas – the self. That's a shame, because to kids hungry for stars, what the price of a cassette really buys is a hero for the collective wall of fame. (RS 679)