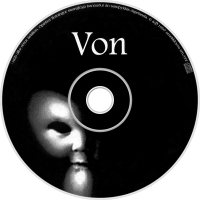 Von(Hope) is the debut album of Icelandic post-rock band Sigur Rós.
The production of the album took a long time, and the end result sounded significantly different from the original recordings. The band considered scrapping the final result and starting all over again, but decided not to because it would have made the process too long. In exchange for recording time, Sigur Rós painted the studio they recorded in.

Von was originally released in Iceland to moderate critical acclaim, but went relatively unnoticed abroad. In the first year following the release, Von sold only 313 copies in Iceland. Following the band's popular international releases, Ágætis byrjun and ( ), it was re-released in the United Kingdom in September 2004, and in the United States a month later. In December 2005, Von and Ágætis byrjun were declared platinum albums in Iceland, signifying domestic sales of over 5,000.