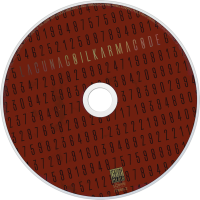 Karmacode is the fourth studio album by Italian gothic metal band Lacuna Coil, released on 31 March 2006 in several countries in Europe, 3 April in the UK and other European countries, April 4 in North America, and 5 April in several other European countries. 500,000 copies of Karmacode have officially been sold worldwide. In Italy the album sold over 20,000 copies, earning the album a Silver record. In the United States, the album sold around 200.000 copies.