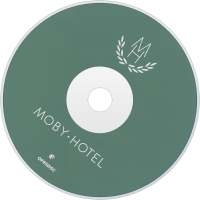 Hotel is the seventh studio album by American electronica musician Moby, first released internationally on March 14, 2005 and then on March 22, 2005 in the United States. Hotel was recorded under the Pacha label and mixed at Moby's apartment, Electric Lady Studios, and Loho Studios in Manhattan, New York City. Initial quantities of the album came with a second CD of ambient music entitled Hotel: Ambient.
The album was a departure from Moby's previous two electronica- and dance-driven albums (Play and 18), encorporating a more alternative rock-based approach, and is the first Moby album since 1993's Ambient to not contain any vocal samples. The album received a mixed critical reception. Despite this, it reached number 8 in the UK and debuted straight at number 1 in some European countries and went on to earn gold and platinum awards in over twenty countries, with global sales of over 2 million copies.