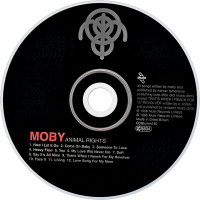 Animal Rights is the fourth studio album by American electronica musician Moby, released on September 23, 1996.Moby's decision to release a punk rock album was in part the result of being disillusioned by the lack of positive media feedback he had been receiving from the music media for his electronic works, which they struggled to comprehend and failed to take very seriously. Ironically, just as Moby decided to change direction, the electronic music he moved away from started to gain recognition and popularity through artists like The Chemical Brothers and The Prodigy.
The album's liner notes contain various pictures (the cover photograph features Moby at two weeks old, being held by his grandfather), an essay on the course of basic rights over history, an essay outlining Moby's disregard for the Christian Coalition, and a page with various "last minute maxims", such as "cruelty is unacceptable" and "you can't expect people to worry about the world when they can't feed themselves or their children."