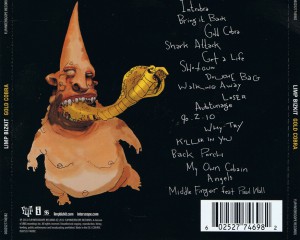 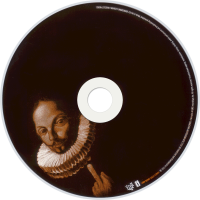 Gold Cobra is the sixth studio album by American rock band Limp Bizkit. Released in 2011 by Flip/Interscope Records, it is the band's first studio album since 2005's The Unquestionable Truth (Part 1), and the first with the full original lineup since 2000's Chocolate Starfish and the Hot Dog Flavored Water. Gold Cobra features an eclectic and diverse sound, but also similar in style to the band's earlier albums. The album, which featured the single "Shotgun" and received mixed to positive reviews, sold nearly 90,000 copies in the United States, peaking at No. 16 on the Billboard 200. Critics praised the return of Borland, and the band's unique sound and playing.

Album Review
If Kurt Cobain hadn’t killed himself, were he to listen to the song My Own Cobain, a bonus track on Limp Bizkit’s first album since the commercial disaster that was 2005’s questionable The Unquestionable Truth (Part 1), he would quite possibly consider ending it all. Loading up on self-pity, presumptuousness, and a lyrical cack-handedness that would shame a stag party, frontman Fred Durst equates his own mindset with that of the erstwhile frontman of Nirvana. "I guess I pushed away the only one who really cared," he drones, "…in my own Cobain." The implication, clearly, is that because Durst believes he shares Cobain’s pain, he is also privy to his genius. It’s difficult to fathom where to begin picking apart such logic. Imagine Vanilla Ice comparing himself to Gil Scott-Heron.
Moby once described Limp Bizkit, and the genre of music they present, as ‘rape rock’, a term that is hard to beat. ‘Idiot rock’, though, works almost as well. For all his toy-tossing ‘rebellion’, Durst is a man with little to say and a rather unappealing way of saying it; for a man approaching middle age the emotional inarticulacy of much of this album is striking. And on the subject of age, it’s difficult to know exactly who Gold Cobra is aimed at. Fans of Limp Bizkit in their original incarnation are now older and presumably wiser than the adolescents who bought early albums such as Three Dollar Bill Y’all$. The notion of 30-something listeners pimp-rolling through the streets listening to a 40-year-old singer whine about haters is incongruous, at best.
With the exception of the always inventive playing of guitarist Wes Borland, here Limp Bizkit sound like a band whose time has passed. Given that this is a group that boorishly exemplified the empty materialism and crass self-centredness that lurked at nu-metal’s core, this is surely no bad thing. And as Crowded House once sang in a sentiment that may as well have been created with Fred Durst in mind, "The excess of fat on your American bones / Will cushion the impact as you sink like a stone".