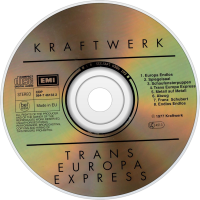 Trans-Europe Express (German: Trans Europa Express) is the sixth studio album by German electronic music band Kraftwerk. Recorded in mid-1976 in DÃ¼sseldorf, Germany, the album was released in March 1977 on Kling Klang Records. The album's themes were influenced by friends who suggested writing songs about the Trans-Europ Express to reflect Kraftwerk's electronic music style. Critics have described the album as having two specific themes: celebration of Europe and the disparities between reality and image. Musically, the songs on this album differ from the group's earlier Krautrock style with a focus on electronic mechanized rhythms, minimalism, and occasional manipulated vocals.

Trans-Europe Express charted at 119 on the American charts and was placed on the Village Voice's 1977 Pazz & Jop critics poll. Two singles were released from Trans-Europe Express: "Trans-Europe Express" and "Showroom Dummies". The album has been re-released in several formats and continued to receive acclaim from modern critics who praise the album as one of the greatest and most influential records of the decade.

Album Review
Trans Europe Express began its journey in 1977 and, as with other Kraftwerk albums, it’s a beguiling mix of nostalgia and futurism. Although the rail network that gave the record its name was disbanded in 1984, it remains a resonant metaphor for the idea of a federal European culture deliberately set out to counterbalance the cultural dominance of America.
The record begins with Europe Endless, a paean to the continent’s “elegance and decadence”. Its wistful, haunting nature sets the scene for an album that establishes connections between personal, classical and industrial themes. The Hall of Mirrors and Showroom Dummies express the discomfort felt by the group at the impact of fame and initiate a seldom-observed psychological theme that would culminate in the group’s presentation of themselves as robots on their next album, The Man Machine.
The title track continues the theme of technology and travel first explored in the Kraftwerk’s surprise 1974 hit Autobahn. Pop’s restless rhythms are inextricably tied to the ceaseless movement of the 20th century, and a line can be traced from the sonic evocation of the railroad in the delta blues to Trans Europe Express and thence via Afrika Bambaata into contemporary dance music. And what could be more romantic than the long train journey travelled on this epic? Yet there’s a thunderous rhythmic force throughout that’s frighteningly unstoppable. At times it’s like standing too close to an express train racing past, lights ablaze in the darkness. The album closes with the dreamy Franz Schubert and then Endless Endless’s grainy voice echoing into a final silence. It feels as though a long journey is at an end.
This remastered release combines the minimal TEE graphic developed for the group’s ongoing world tour with the original studio photographs that appear to portray the group as 1930s radio stars or wealthy accountants in marked contrast to their role as sonic innovators. This underlines a mysteriousness that has seen Trans Europe Express’s stature grow gradually but inexorably over the last three decades.