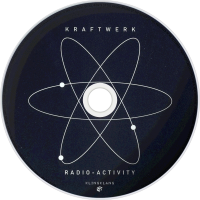 Radio-Activity (German title: Radio-Aktivität) is the fifth studio album by German electronic band Kraftwerk, released in October 1975. Unlike Kraftwerk's later albums, which featured language-specific lyrics, only the titles differ between the English and German editions. A concept album, Radio-Activity is bilingual, featuring lyrics in both languages.