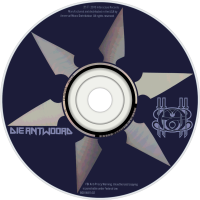 $O$ is the debut album by South African rap-rave group, Die Antwoord. The album was initially a widely-circulated internet-only release, and made available to stream for free on the band's website prior to Interscope Records signing the band. The song "Wat Pomp?" had a music video released on June 6, 2009, followed by "Enter the Ninja" (a track with previous exposure as a viral video on YouTube and other video-hosting services), which received an official release on August 9, 2010. 'Fish Paste' and 'Beat Boy' have also been released as promotional singles. "Enter The Ninja" debuted at #37 in the UK Music Charts on September 19, 2010.

Following the group's signing to Interscope in the US, it was announced that $O$ would be rereleased in physical format with a different tracklisting. Diplo produced one of the new tracks on the re-release, "Evil Boy", for which a promotional video was made available on 6 October 2010. The US iTunes digital release includes bonus track "Wat Pomp?" and an alternate version of "Evil Boy" not present on US physical release.

In an interview with Xeni Jardin, Ninja mentioned that he considered the album to be the first in a five-album plan.