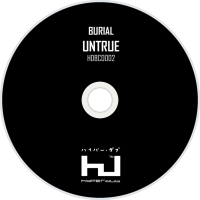 Untrue is the second album by the producer known as Burial. It was released on 5 November 2007 as a 13-track Digipack CD and a nine-track 2xLP from which some of the beatless pieces were edited. The album marked a development in Burial's sound; it employed pitch-shifted and time-stretched vocal samples in many tracks, in comparison to his previous mostly instrumental work. It was named the third best album of the decade by Resident Advisor.