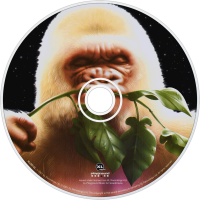 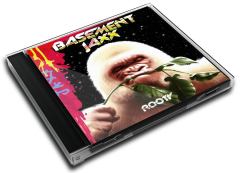 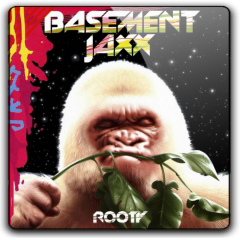 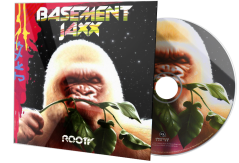 Rooty is the second studio album by English electronic dance music duo Basement Jaxx. It was released on 26 June 2001 on XL and Astralwerks in the UK and US respectively. The singles released from the album were "Romeo", "Jus 1 Kiss", "Where's Your Head At", and "Get Me Off". "Do Your Thing" was also released as a single in Australia in 2003, and in the UK in 2005, after the release of their compilation album The Singles.

The name is taken from Basement Jaxx's regular club event held at a small pub in Brixton. The cover art features Snowflake, the world's only known albino gorilla.

The music video for the song "Romeo" stars Divya Dutta.

User Album Review
Back in 2001 as the rest of the dance music fraternity first began latching on to the '80s revival, South London's finest again re-invented the wheel.
Upon its release Rooty was as unpredictable as 1999's exemplary Remedy, the debut LP that belatedly sealed the Basement Jaxx reputation as true dancefloor pioneers...
After an early career that saw them invent 'punk-garage', become children’s TV-friendly crossover chart heroes with each new single and still remain the toast of clubland, Rooty was another triumph of unlikely eclecticism. In less capable hands the Jaxx method of blending ostensibly incompatible components to make perfectly measured floor-fillers would seem like the work of dilettante chancers. Yet Felix Buxton and Simon Ratcliffe proved on their second album that no sub-genre is safe from their adept efforts.
"Romeo" is still a bittersweet pop classic and will break your heart or make you dance in one frantic twitch. "Breakaway" remains warped, Aphex Twin hued p-funk, all stuttering disco stabs and tumbling beats. "SFM" is syncopated Missy Elliot-esque sci-fi r nb, whilst "Jus 1 Kiss" comes on like glitterball disco-house with the circuits rewired. Even steel drums can’t ruin it.
As on Remedy, listeners are lulled into a false sense of security on each listen. Slarta John's gruff Brummie MC-ing on "Jump 'n' Shout" ripped apart notions of that LP being a purely summery confection. Here, even darker forces are at work. "Get Me Off" is dark, tough house with a bassline you wouldn't wanna meet down a dark alley. Almost as deviously, the mock jock-rock of "Where' s Your Head At", works regardless of irony. It may sound like early, dated Beastie Boys, drowning in snarling riffs and frat-boy posturing but it rocks like a firework in a quarry.
Even now the achingly cool fashionistas throw labels at these SW9 superstars, and accusations of style over content still come from jealous detractors. But what is still sure upon hearing Rooty, is that there ain't much better than the house that Jaxx built.