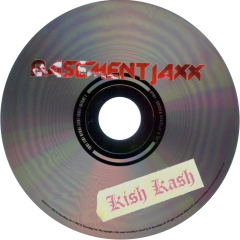 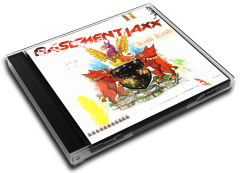 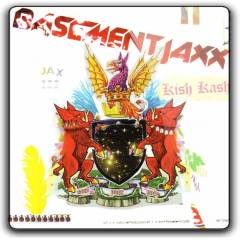 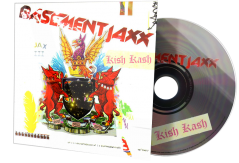 Kish Kash is the third studio album by English electronic dance music duo Basement Jaxx. It reached number 17 on the UK Albums Chart and won the Grammy Award for Grammy Award for Best Dance/Electronica Album the first time it was awarded in 2005.

User Album Review
Foot balls, volley balls, rugby balls, tennis balls, bowling balls, wrecking balls. Take your pick. Basement Jaxx have got 'em... lots of 'em.
Kish Kash is a bold and daring experiment in music making that sees Felix and Simon progress their creative talents beyond those witnessed on 1999s Remedy and 2001s Rooty. Both of these were, and still are, great albums that did much to vitalize the UK dance scene with their up, shouty, carnival-style approach to house music.
The third album is markedly different. It's darker, more urban and a more personal record with the focus having shifted to one of song writing as well as tune making. Radcliffe says, "We were listening to what other people were doing and realising it was all pretty stagnant and uninspiring". Consequently, the album sews punk, northern soul, hip hop, garage and electronica together and then pulls the whole lot inside out.
The first single "Lucky Star" featuring the manic, adolescent spits of Mercury winner Dizzee Rascal is a snarling, gritty ode to his success. Employing Bhangra vibes, heavy breaks and twisted, stuttering electronics to create a truly effervescent cut that no self-respecting end-of-the-year compilation would be with out.
There are collaborations aplenty here. Totlyn Jackson lets rip with the soul chat over the harmonica, organ and guitar fuelled house-blues stomp along "Supersonic" whilst ex N Sync-er JC Chasez provides the falsetto on the boisterous "Plug It In". This is a fine, raucous moment as is the Siouxsie Sioux track "Cish Cash".Here the boys bring a piece of 1977 back to the future and give it the East London overhaul. This is up, noisy, punk house where revving, dirty bass are set to a punchy four to the floor with goth-defying results.
Conversely, the album does contain some poignant down tempo moments, "If I Ever Recover", an emotive, string-soaked number and the lesser "Feels Like Home", an atmospheric but lengthy waffle.
The bootleg culture has tuned the collective ear to genre-fusing experiments. Not so long ago it was Destiny's Child who went out with Nirvana to rock the clubs high fiving The Strokes and Christina Aguilera as they passed them at the bar. What these boys have done is build a new venue entirely just around the corner. At a time when dance music seems to be a low on ideas, Basement Jaxx deliver a welcome kick in the arse. Kish. Kash. Bosh!