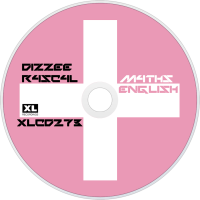 Maths + English is the third studio album by British rapper Dizzee Rascal. The album went gold in the UK after selling over 100,000 copies.

User Album Review
History has proven the U.K Garage Committee to be an ill-fated musical alliance. Self-appointed lords of the dance; MC Creed, Norris ‘Da Boss’ Windross and the Dreem Teem’s attempts in 2000 to defend the garage scene from a new wave of teenage MC’s and producers inadvertently incubated a new underground movement.

8 years later it’s a bittersweet victory for the upsetters. Gone are the UKG old guard. The 18 year-olds have grown up. Some have disappeared, others are in West End musicals and a handful lit the touchpaper of the most exciting yet troubled sound to emerge from British streets in decades. Yet those who dreamt the advent of grime would at last present a ground-breaking alternative to uninspiring Brit-rap were maybe mistaken.

So here’s Maths And English. Perhaps for the 21 year-old from Bow it’s a wise reaction to a grime scene that, after brief mainstream successes (Lethal Bizzle, Roll Deep, Kano), is back underground, thwarted by negative press, politics, insufficient backing and poor quality control. As lead single ‘’Sirens’’ suggests, a change of direction is on the cards. Dizzee’s third is, bar a few exceptions, a hip-hop record with the world in its sights.

‘’Pussyole (Old Skool)’’ is the most accessible song he’s ever recorded; a club track with a Wiley-alluding second verse diss. Following dreamy opener ‘'World Outside'’ – ‘There’s a world outside of the manor’ – Dizzee’s in party mode, introspection in moderation. It sets the tone for the rest of the album. ‘’Sirens’’, despite all the gushing enthusiasm in the broadsheet press, is basically NWA’s ‘‘Staight Outta Compton’’…with more guitars.

Southern rap legends U.G.K bring heat to ‘‘Where Da G’s’’. Coming in like the kind of sparse, futuristic track at home on Boy In Da Corner before building, over swathes of crunk synths, into a U.K rap track you can actually imagine dropping in a Houston club.

Sidestepping Shy Fx-produced ‘‘Da Feelin’’ – genre-hopping showing it’s limitations – the Jazze Pha-esque (Ciara, Ludacris) ‘’Flex’’ and the Bugsy Malone-sampling ‘’Wanna Be’’ are both sure fire hits. Dizzee’s ear for a pop hook is more acute than ever.
With the exception of the brooding finale ‘’You Can’t Tell Me Nuffin’’ this is a bid for the big time. If that means leaving behind the insular scene that bore him then so be it. Not that it really matters. As if pre-empting the tedious calls of sell-out, on ‘’Bubbles” he states: ‘Underground or overground, what’s the difference? I’m the king’. He’s yet to be proven different.