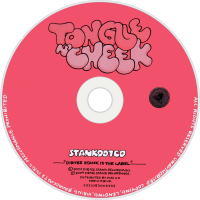 Tongue n' Cheek is the fourth studio album by British rapper Dizzee Rascal. The album was released on 20 September 2009 and includes the number one singles, "Dance wiv Me", "Bonkers", "Holiday" and "Dirtee Disco". It has been certified platinum by the BPI for sales of over 300,000, making it the best-selling album of Rascal's career.

User Album Review
One of the biggest shocks of East London-born rapper Dizzee Rascal’s career to date was the relative curve ball of his third long-player, 2007’s Maths + English.
Its unashamed mainstream ambition and sheen momentarily blinded many early supporters to its genuine brilliance. People wrinkled their noses at the much-maligned Lyn Collins Think (About It) break, which was all over the track Pussyole (Old Skool), but it probably had a different resonance to the young artist than it did older listeners. (The “Woo! Yeah!” sample was once the staple of critically reviled early 90s hardcore and hip-house.) Factor in turns from both Lily Allen and Arctic Monkeys, and ubiquitous use of US gangsterisms, and he looked like he was playing a dangerous game. Yet Dizzee achieved the seemingly impossible task of jumping from the UK underground to the pop charts without alienating his core fans, with him since 2003 debut Boy in da Corner.
Anyone wanting a return to the grime of six years ago will be disappointed by Tongue N’ Cheek – only the stuttering Money Money comes close. The man Jeremy Paxman called Mr Rascal has been compared to Jay-Z with little irony for two years now, and the parallel is useful in terms of ambition and exposure. But in the UK we’re keener on a cheeky boy rather than a thug – hence the ‘rascal’ – and there is much humour on show across this record that stops well short of being outré or offensive.
You’ll have already heard Bonkers, Dizzee’s smash with Armand Van Helden, and the Calvin Harris and Chrome-starring Dance Wiv Me and Holiday. What’s surprising, though, is that this is packed with further contenders for top ten hits – it comes on like a British urban Thriller. Already mooted as a future single is Dirtee Cash, a timely credit crunch reworking of the Home Counties house classic Dirty Cash (Money Talks). On Road Rage he spits a tale of crashing his Mini Cooper into a police car over tough, almost industrial beats, but best of all is the Shy FX-produced dancehall of Can’t Tek Me No More, which echoes the dub reggae-friendly proto big-beat of such 90s acts as Monkey Mafia and Lionrock.
A monstrously successful fourth album, Tongue N’ Cheek is the release to officially crown Dizzee as UK dance/hip hop royalty. The boy’s some prince, you know.