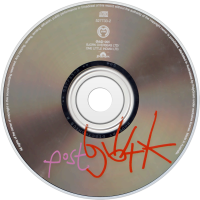 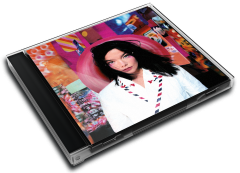 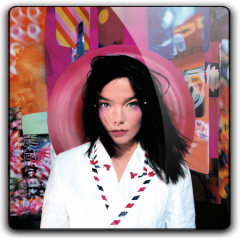 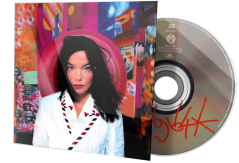 Post is the third studio album by Icelandic singer-songwriter and musician Björk, released in June 1995. Met with critical and commercial success, Post built on the electronic-pop of previous release Debut and flirted with various other musical styles including big band and trip hop, and featured numerous producers. Post went on to be certified Platinum in various regions including the UK, USA, Canada, Europe and Australia, and produced three UK Top 10 singles.

User Album Review
A dedicated forerunner of fashion, Björk’s recorded output has always been ahead of the curve, both in its embracing of technology (and the subsequent compositional rewards) and its audacious ambition and inherent eccentricity. What’s truly arresting, though, is just how vibrant, how astoundingly fresh, her work sounds today. Post is 14 years old, but it could just as easily have sprung forth three months ago.
This album – her second, as its title implies, discounting a childhood effort of 1977 – opens with what was Björk’s biggest single at the time: Army of Me debuted at 10. Oh So Quiet would later trump this achievement, peaking at four, but Post’s lead track is a fine representative effort, a tone-setting number that’s closer to the core of this collection than the jaunty, off-Broadway bluster that followed two singles later. With its clangourous industrial percussion, sinister synthesizers and ominous bass, Army of Me immediately signalled movement away from the folk-like leanings and comparatively polite pop of her breakthrough long-player, Debut.
The following Hyper-Ballad – single four of six taken from this 11-tracker – is similarly striking, and remains among the very finest songs in Björk’s canon. Furthering the singer’s creative relationship with director Michel Gondry, its accompanying video is a masterstroke of suggestive simplicity, evocative elegance; that it suits its skittering beats and contorting vocal – from pronounced restraint to propulsive ebullience – perfectly is an indelibly excellent example of music meeting art. It’s a benchmark of successful audio-visual synergy.
Turning away from the album’s brilliant singles – Isobel is the personal favourite – penultimate track Headphones sees Björk collaborating with then-paramour Tricky, at the time riding a wave of hype generated by his scintillating, unsettling Maxinquaye album. It’s a suitably uncomfortable listen, so intimate as to seem disquieting. Tricky’s also aboard for Enjoy, and further contributors include Massive Attack producer Nellee Hooper and Howie B, who’d later work with U2 on their Pop album.
Post’s influence is felt far and wide today, and not exclusively in dance and electronica circles – in 2008, an assortment of the indie underground’s finest got together to create Enjoyed (see what they did there?), a tribute album released for free via the Stereogum website. Telegram, an album of Post remixes, was released in 1996, furthering the reach of its source material. In short, the songs here continue to inspire, and this disc’s imperial design qualifies it as a timeless classic.