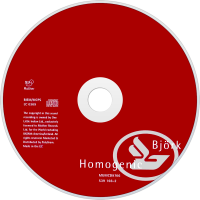 Homogenic is the fourth studio album by Icelandic musician Björk, released in September 1997. Produced by Björk, Mark Bell, Guy Sigsworth, Howie B and Markus Dravs, it was released on One Little Indian Records. The music of Homogenic was a new style for Björk, focusing on similar sounding music combining electronic beats and string instruments with songs in tribute to her native country Iceland. Homogenic was originally to be produced in her home in London, but was later recorded in Spain.

Homogenic marked the first of several production collaborations between Mark Bell and Björk, whom Björk would cite as a major influence on her musical career. The album peaked at number twenty-eight on the Billboard 200, and at number four on the UK Albums Chart. Five singles were released from Homogenic: "JÃ³ga", "Bachelorette", "Hunter", "Alarm Call" and "All Is Full of Love". Homogenic was highly acclaimed on its initial release and continues to be praised by critics, with Sal Cinquemani of Slant Magazine stating that "if not the greatest electronic album of all time, it's certainly the greatest of its decade".

User Album Review
Bjork is one of the most difficult of all contemporary musicians to criticize, because she always seems to be one step ahead of the criticism. She is so thoroughly unique that any negative opinion would almost certainly be subject to review, since it is hard to imagine a reviewer who would be capable of claiming that he or she understands the work well enough to bring it down a peg or two. Much of Bjork’s work seems foreign simply because she is; it is rare for a woman from Iceland to conquer the world market. Her unusual style can certainly be attributed to her Scandinavian upbringing, and I believe (uh-oh, here I go) that this is most likely because she was fairly isolated from ‘standard’ (i.e., American, indigenous, blues-based) music structures. In addition, though, there can be little doubt that Bjork is one of the most willful artists of this era.

Her songwriting is opaque and mysterious, but not unpleasant, kind of like night swimming. It is something that can be appreciated solely for the textures, for the aesthetic experience, even if you cannot make out exactly what it is that you are basking in. Bjork is intelligent enough to reach into unknown territory, but what she brings back is so personal and unusual that it is hard for most others to follow her. If you hang on, it should eventually pay off, but an open mind is essential to finding the key to her work. Homogenic is rich with string arrangements and kinetic percussion programming, both of which supply the musical backbone to her melodic flights of fancy. Occasionally, repetition stands in the way ("Joga" had my sons laughing at seemingly endless the chorus melody) but she is off on a path of her own, and I for one am willing to follow her.

It seems as though females are much more inclined to break down melodic barriers and search for a truly unique means of expression than most men are. Joni Mitchell, Kate Bush, Tori Amos, Sophie B. Hawkins and Jane Siberry are but a few who have taken melody into their own hands and attempted to transform it beyond typically recognizable boundaries. Since Joni Mitchell, Bjork has been the most successful at this game, putting an unpredictable spin on almost everything she touches. Make no mistake – these are Bjork’s songs, and they aren’t meant to be performed by anyone else (although it isn’t impossible, just unlikely). Nobody else could do justice to work that is so personal. Rather than criticize what I cannot understand, I will just bask in it and let it wash over me.