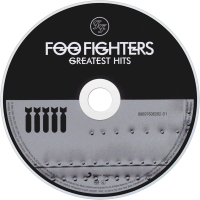 Greatest Hits is a compilation album released by American rock band the Foo Fighters on November 3, 2009.

Greatest Hits includes a selection of Foo Fighters hit singles. Two singles from their 1995 debut, Foo Fighters album ("This Is a Call" and "Big Me") are included. Three singles are included from 1997's The Colour and the Shape album ("Monkey Wrench", "Everlong" and "My Hero"). The Colour and the Shape remains the band's biggest selling album in the US. Two singles are included from 1999's There Is Nothing Left to Lose album ("Learn to Fly" and "Breakout") as are two singles from 2002's One by One album ("All My Life" and "Times Like These"). Surprisingly only one single ("Best of You") is included from the band's biggest world wide selling album In Your Honor, released in 2005. "Best of You" remains the band's highest charting hit on the US, UK and Australian singles charts. Two singles are included from 2007's Echoes, Silence, Patience & Grace album ("The Pretender" and "Long Road to Ruin"). Greatest Hits also contains two new songs "Wheels" and "Word Forward".

"Wheels" is the first single taken from the album, which premiered on radio on September 23, 2009. The single was officially released on September 29, 2009. "Wheels" and "Word Forward", which was written for Dave Grohl's friend, Jimmy, who had recently died, were composed during the Echoes, Silence, Patience & Grace tour and recorded specifically for the compilation with producer Butch Vig.

A deluxe edition of the compilation includes a book and a DVD featuring some of the band's music videos and live performances. It also includes a video for "Wheels" directed by Sam Brown, who also worked on "The Pretender".

Album Review
A greatest hits set is a perfect vehicle for the talents of Dave Grohl. The former Nirvana drummer has always exhibited a fine ear for enormous pop hooks, and with the Foo Fighters has enjoyed considerable chart success. But the last truly great album he appeared on was, inarguably, In Utero.
Grohl was intimidated by Kurt Cobain’s writing for Nirvana ”“ though he’d pen songs, he kept them to himself ”“ but when the frontman committed suicide in 1994 Grohl struck out alone rather than man the kit for another group. Using the name Foo Fighters in an attempt to embrace anonymity, Grohl’s first recordings stirred enough label interest to necessitate a stepping out from the shadows. A collection of what were little more than demos became the first Foo Fighters album, a band was formed to take the songs on tour (featuring half of Sunny Day Real Estate), and the rest, as they say, is history.
And here is that history ”“ or at least 13 tracks of it, along with a couple of new songs and a solo acoustic take on fan-favourite Everlong (the studio version appears, too). These are big songs, full of cracking choruses; they are, at their centres, loud and proud pop songs dressed up as rock numbers simply because of the amplification addictions of individuals involved. Over the course of a full album the Foos can drag ”“ 1997’s The Colour and the Shape may be the exception ”“ but here the four-piece never allow attentions or affections to wander. It’s a perfect greatest hits set ”“ all the songs you recognise, without any of those pesky numbers that never made it to radio. It’s a bluffer’s guide, Foo Fighters for Dummies, and there’s no problem with that at all.
But who does it appeal to? The Foos have sold millions of albums already, and two new tracks ”“ Wheels and Word Forward ”“ will be downloaded separately by many. With Christmas around the corner, Greatest Hits is positioned as a fine stocking filler for a younger brother or sister just beginning to get interested in rock music ”“ the MTV variety, assuming the channel plays videos these days. Long-term fans will appreciate the ‘how to multitrack at home’ notes from Grohl, but said attraction aside this is straight-up Foos 101, best appreciated by fair-weather followers and absolute beginners.