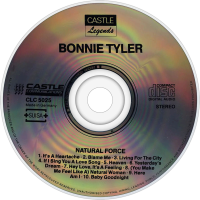 Natural Force (released as It's a Heartache in the USA) is the second album from the Welsh singer Bonnie Tyler. Released in 1978, the album contains one of Tyler's biggest hits "It's a Heartache". Another highlight on the album was the cover version of "(You Make Me Feel Like) A Natural Woman", a 1967 single by Aretha Franklin.

Based on the success of "It's a Heartache", the album led many to believe that Tyler was a country singer. Natural Force is also regarded as her most countrified album.