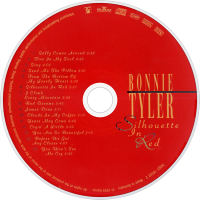 Silhouette in Red is the tenth studio album recorded by Bonnie Tyler, released in Scandinavia, Europe, and South Africa in 1993, and Japan and Brazil in 1994. In 1993, it was announced that the album had already achieved a Gold Disc in Norway the day before it was officially released.

Continuing her German label recording, she comes up with covers of one classic ("You Are So Beautiful") in addition to 14 original hits. The album was moderately successful, reaching #6 in Norway and the top 40 in four other countries. The album was not released in America or the UK.

According to Frank Farian's 2003 book about Dieter Bohlen, Stupid Dieser Bohlen, the bigger part of lyrics were re-written (uncredited on the album) by Dave Ashby, an English musician based in Hamburg, Germany.