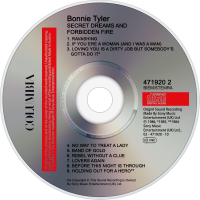 Secret Dreams and Forbidden Fire is the sixth studio album by Bonnie Tyler. Released in 1986 peaked at no.24 on the UK album chart and no.106 in the US, though the album gained success in continental Europe.

Like its predecessor, it is produced by Jim Steinman and it features four of his songs. Among them are "Ravishing," the duet "Loving You's a Dirty Job but Somebody's Gotta Do It" (with Todd Rundgren) and the hit "Holding Out for a Hero", which was previously included on the soundtrack of the movie Footloose.