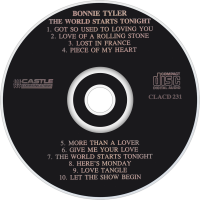 The World Starts Tonight is the debut album by the Welsh singer Bonnie Tyler released in 1977.

With a mixture of country and pop infused in the production, this album led to a future teaming with Jim Steinman after her time with Scott and Wolfe ended.

Special tracks on the album are cover versions of Piece of My Heart and Love of a Rolling Stone, the only tracks not co-written by the producers.