Goodbye to the Island 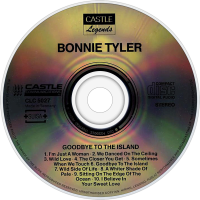 Goodbye to the Island is the fourth album by Bonnie Tyler released in 1981. The track "Sitting on the Edge of the Ocean" was the Grand Prix winner of the Yamaha Music Festival held in Japan in 1979.

In April 2012, the album was released digitally under the "Rdeg" record label.