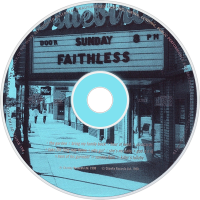 Sunday 8PM is Faithless' second album, released on 28 September 1998. The album contains the hit singles "Bring My Family Back", "Take The Long Way Home", and "God Is A DJ". The album reached #10 place in the UK charts.
In 1999 the album was re-released as Sunday 8PM / Saturday 3AM, containing an extra CD with mixed versions.

The image on the Album/CD Cover is the Bluebird Theatre in Denver, Colorado United States.