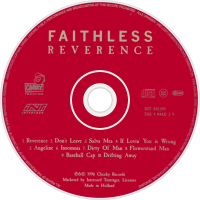 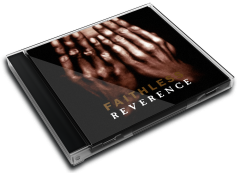 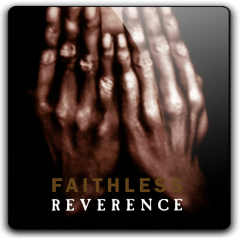 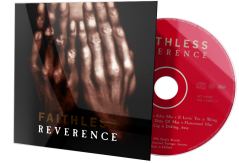 Reverence is Faithless' first album, released in April 1996 and then reissued in October. The album contains several singles that have subsequently become Faithless classics, such as "Don't Leave", "Salva Mea", and "Insomnia". The album reached #26 in the UK charts.
In 1996 the album was re-released as Reverence / Irreverence containing an extra CD with remixes of the original songs.
Closing track "Drifting Away" has become well known for its use in Channel 4 comedy series Trigger Happy TV.

User Album Review
It still sets the strobes blazing in your head 12 years on. Indeed, absolutely anyone who found themselves on a dancefloor in 1996 must have reached for the lights at least once as the synth arpeggio kicked in after Maxi Jazz had ominously muttered "I can't get no sleep" on Faithless' Insomnia. For at a time when clubland was still in the grip of handbag house Insomnia stood out like Banquo's ghost at a party of glammed-up club bunnies. A song which celebrated not the euphoria on the dancefloor but warned of the shaking night-terrors that awaited you when you got back home, yet did so within a track that was an overwhelming sensory rush in itself.
However, like New Order ”“ who also managed to articulate desperation and despair within banging peak-time grooves ”“ Faithless also crossed over to people whose only experience of insomnia came from a surfeit of cheese rather than anything stronger before bedtime. Although later albums like 2004's No Roots and 2006's To All New Arrivals would see Faithless become increasingly formulaic as they capitalised on their status as a stadium techno group for ageing ravers, 1996's Reverence shows how multi-faceted a so-called 'dance' album can be. That’s largely down to the different personalities involved ”“ with DJ Sister Bliss and production lynchpin Rollo clearly driving the pure dancefloor tracks like Insomnia and Salva Mea, whilst Maxi Jazz brings his soundsystem heritage with Soul II Soul and a certain throaty gravitas to the title track and the dubby Dirty Ol' Man.
Even Rollo’s sister Dido shines on her guest vocals on Flowerstand Man, its open-hearted honesty standing in contrast to the Bridget Jones ballads she would make her millions with. But perhaps the two best moments come from Faithless' lost member, Jamie Catto, who invests the eerie chamber music of Angeline and the beautiful acoustic lament Don't Leave with a vulnerable melancholy notably missing from the albums which followed his departure after 1998's Sunday 8pm, when hand-wringing platitudes and ponderous trance started to level the emotional and musical peaks and troughs that made Reverence a truly revelatory debut.