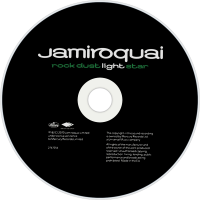 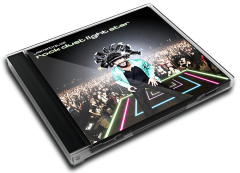 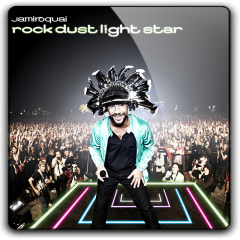 Rock Dust Light Star is the seventh studio album released by British acid jazz band Jamiroquai. The album was released on November 1, 2010.
The album was recorded at Jay Kay's home studio in Buckinghamshire, as well as Hook End Manor in Oxfordshire, and Karma Studios in Thailand. The album is written entirely by the band, and produced by first time collaborators Charlie Russell and Brad Spence. The band revealed that the musical style of the new album will be more centred on funk and rock, however, frontman Jay claimed that the tone and style of the album were hard for him to describe. Promotion of the album began in October 2010, with a press conference involving band members Jay Kay, Derrick McKenzie, Sola Akingbola, Matt Johnson, Paul Turner and Rob Harris. They announced that the group were to play two concerts, in Colombia and Brazil, to promote the album, before discussing plans for a possible world tour in 2011. In a review for the Daily Telegraph, the album was described as "blistering, poetic, meaty, reflective and inspiring". Upon release, the album debuted at #7 on the UK Albums Chart with sales of less than 35,000 copies. As of December 2010, the album has sold 210,000 copies worldwide, less than half of the sales of their previous album, Dynamite. On 17 December 2010, the album was certified Gold in the UK for reaching sales of 100,000 copies. In March 2011, Jamiroquai announced plans for the speculated worldwide tour, starting with dates Hallenstadion in Zurich on 18 March 2011, and ending with two shows at the SECC in Glasgow on 20 April 2011. In June 2011, another string of tour dates were confirmed on the band's website for June and July.

User Album Review
Jamiroquai have spent their 18-year career occupying an indistinct spot in British music somewhere between almost cool and slightly naff. It has helped Jay Kay (for Jamiroquai, let’s face it, is he, plus an evolving cast of collaborators) become one of those artists whose music seems somehow fashion-proof, because it’s never been in or out of it.
Since their mainstream emergence with number one debut Emergency on Planet Earth back in 1993, the band’s disco-friendly jazz-funk sound has undergone very little makeover, and although Kay’s been somewhat laughably dubbed "the king of funk" in downmarket newspapers and regularly gushed over in upmarket Sunday supplement profiles, he has always been a little too unashamedly successful for music anoraks to embrace unreservedly. It’s easy to sneer at the man’s taste for loose cars and fast women, and smirk cynically when he gets in another tabloid-documented late night scrape; but he is still around not because of his penchant for silly hats or memorable videos, but due to undeniable songwriting ability.
The 12 tracks here are further testament to that talent. The falsetto disco of White Knuckle Ride could as easily have been released in 1980, and Smoke and Mirrors features a honking sax that could just as easily have featured in an M People track or an Average White Band instrumental. Meanwhile, the lyric on the latter concerns someone who "wants your lovin’ tonight" ”“ Kay walks a thin line between the classic and the clichÃ©d, and doesn’t seem too bothered which side he strays onto. Yet if you can leave your prejudices at the door there’s much to enjoy for fans of an unaffected good time under the nearest glitterball.
In fact it’s when he strays from familiar generic territory that he flounders. The Lighthouse Family-style gloop of single Blue Skies sounds limp and drippy, to the point where the words Wet, Wet and Wet spring to mind. Thankfully a slight sag in the middle of this album is made up for with the Blaxploitation dramatics of Hey Floyd and vintage soul smooch of Never Gonna Be Another. They have that vintage feel that makes you swear you’ve heard them before, but you don’t know where. Then you stop asking if it’s okay to like this music, because it’s a guilty pleasure minus the guilt.