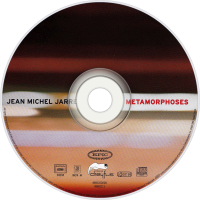 Métamorphoses is an album by Jean Michel Jarre, released on Sony Music in 2000. It was released in the U.S. on Disques Dreyfus in 2004. It is his tenth overall studio album.

This album was, to fans, a surprising break from his previous works, as it makes extensive use of vocal elements, as well as house, techno, trance, dance-pop, breakbeat, and downtempo sounds. The vocal elements are not short, sampled pieces as highlighted in his album Zoolook, but longer, more integral parts of the work, and thus quite surprising for an artist known for his instrumental works. Métamorphoses is also Jarre's first album to contain actual songs with lyrics. Jarre's own voice is heard through a vocoder in many of the songs, but the album contains several other singers as well, mostly female singers. "Rendez-Vous à Paris" features Sharon Corr on violin. "Rendez-Vous à Paris" and "Bells" are the only largely instrumental tracks on the album; in the former only the track title is repeated in rhythm, the latter does not have intelligible lyrics. Although the album was generally not badly received by critics, and despite the collaborations and a number of single releases ("C'est la Vie" and "Tout Est Bleu"), Jarre did not achieve great mainstream success with this album.