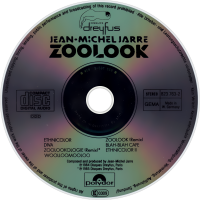 Zoolook is the fourth overall mainstream studio album by Jean Michel Jarre, and released on Disques Dreyfus in 1984. It makes extensive use of digital recording techniques and sampling. It is considered by many fans as one of Jarre's most experimental albums to date. Much of the music is built up from singing and speech in 25 different languages, along with synthesizers, as well as more traditional instruments. Much of the tone of the album appears to be influenced by elements of musique concrète and by his time as a student of Pierre Schaeffer.

Parts of the album were reworkings of material that had already appeared as sections of the album Music for Supermarkets, released the previous year. The track "Moon Machine" was recorded for this album but not included; it later appeared on a flexidisc in Keyboard Magazine (March 1986 issue), the 12-inch release of "Fourth Rendez-Vous" (1986), and the much later Images compilation album (1991).

Zoolook is one of the first Compact Discs labeled as DDD: Digitally recorded, mixed and mastered.