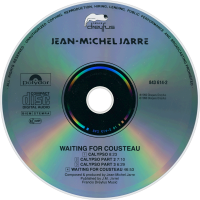 Waiting for Cousteau (French title: En Attendant Cousteau) is the seventh overall studio album by Jean Michel Jarre, released on Disques Dreyfus, licensed to Polydor, in 1990. The album was dedicated to Jacques-Yves Cousteau and was released on his 80th birthday 11 June 1990. The title of the album is a reference to Samuel Beckett's play Waiting for Godot. The album has been acclaimed by critics as one of Jarre's greatest works, due to its extreme stylistic differences from his other albums, especially the title track, which Allmusic describes as "groundbreaking stuff". The album reached Number 9 in the UK charts.