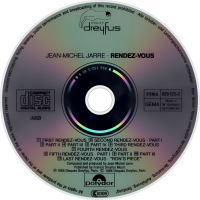 Rendez-Vous is an album of instrumental electronic music composed and produced by Jean Michel Jarre, and released on Disques Dreyfus, licensed to Polydor, in 1986. It is his fifth overall studio album. It sold some three million copies worldwide and remains Jarre's longest-running chart album in both the U.S. and UK, with a 20 week run in the U.S. and an impressive 38 week run in the UK. The last track on the album was supposed to have the saxophone part played in outer space by astronaut Ron McNair, but on January 28, 1986 he and the entire Space Shuttle Challenger crew were killed. 73 seconds after lift-off the shuttle disintegrated. In memory, this piece was dedicated to him. On the album the saxophone part is played by saxophonist Pierre Gossez.