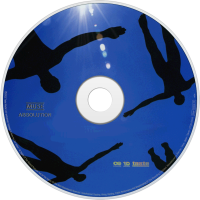 Absolution is the third studio album by English alternative rock band Muse. It was released on 21 September 2003 in the United Kingdom on Mushroom Records and A&E Records and on 23 March 2004 in the United States by East West Records and Taste Media. The album followed its predecessor's tendency, increasing its heaviness and intensity alongside its ambitious thematics, this time trended to apocalyptical concepts. In 2009, it was voted by Kerrang! as the second-best album of the 21st century thus far. (Muse's previous album, Origin of Symmetry, and their subsequent release, Black Holes and Revelations, also appeared in the top fifty).

Album Review
Love them or hate them there's no denying that Muse have energy in abundance. In Absolution, their third offering, they appear more dramatic and tortured than ever.
I was completely bowled over by the force of 1999s Showbiz and the ability of singer Matt Bellamy to work himself into a frenzy over the course of 3 minutes. From that point on Muse knew they'd hit on a winning formula; Origin of Symmetry (2001) and now Absolution show no departure from this original sound.
"Apocalypse Please" is a daring opener and sets the scene for what could have been the most dramatic album of the year. I say could have been because with the advent of The Darkness, Muse may find themselves fighting it out for top spot in the rock opera stakes. It seems that understated isn't currently the order of the day in British music.
Absolution laughs in the face of subtlety. In fact most of the tracks would make an excellent soundtrack to any blockbuster suspense movie. There's no mistaking that Muse make it their aim to render as much conflict as possible in both their lyrics and instrumentals. Single "Time Is Running Out" is a great example of this. "You will squeeze the life out of me", he sings. We know how he feels. This album is not for the faint-hearted and should not be played in times of stress or emotional unease. I fear for the students locked away in their cold rooms crying out "I wanted freedom but I'm restricted, I tried to give you up but I'm addicted".
Bellamy has been compared to Rachmaninov. I wonder whether either of them would be complimented by this comparison, but it's certainly true that Muse are at their best when Matt is at the piano. "Butterflies and Hurricanes" demonstrates his undisputed talent excellently.
Muse demand a reaction and you have to admire that in a band. If you ignore the fact that these songs are probably just a vehicle for Bellamy to divulge his obsession with all that is dark and sinister, you're left with a number of finely crafted and very palatable songs. Don't be ashamed, embrace the melodrama!