Track List
01) And Now for Something Completely Similar
02) Take Two Placebos and Call Me Lame
03) What's the Matter With Parents Today?
04) Dinosaurs Will Die 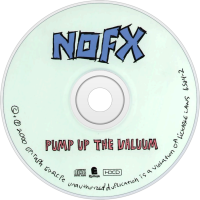 Pump Up The Valuum is the eighth studio album by the American punk rock band NOFX. It was released on June 13, 2000 through Epitaph Records. It was NOFX's last album released through Epitaph. The title is a play on words, and is purposely misspelled to avoid a lawsuit, similar to the one The Melvins faced for their album, Lysol, in that it referenced a trademarked brand-name, in this case Valium. This is explained in the 45 Or 46 Songs... album booklet.

The initial song, "And Now for Something Completely Similar", is a parody of the famous saying "And Now for Something Completely Different" from Monty Python skits. As a pun, the intro sounds very similar to Linoleum from the band's 1994 album Punk in Drublic, right down to El Hefe warming up his voice before the song begins, while the solo bass part echoes Shadows of Defeat from Good Riddance.

The song "Dinosaurs Will Die" features a part of the intro skit from The F.U.'s song "Civil Defense" off the album 'Kill For Christ'. Surprisingly, the words which are spoken during this intro ("This is not a test of the emergency broadcast system") also appear in the Bad Religion song "Los Angeles Is Burning", on their 2004 album "The Empire Strikes First".

All of the vinyl copies of this record were colored blue.

According to Fat Mike, "...the title track 'Pump Up the Valuum' got cut from the album. That's weird. We gave it to Epitaph for Punk O Rama 5." Three other songs were mentioned in the Pump Up the Valuum booklet as songs that didn't make it to this record, but that will be in upcoming ones:

"Pods and Gods" was another outtake from this album that was released later.