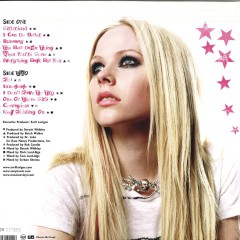 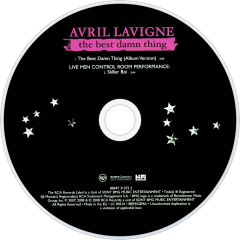 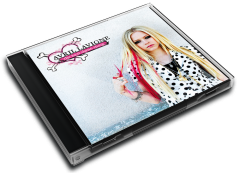 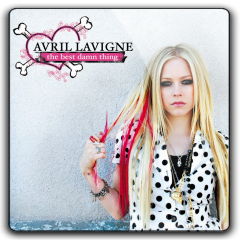 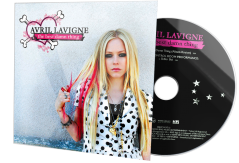 The Best Damn Thing is the third studio album by Canadian singer-songwriter Avril Lavigne. It was released on April 13, 2007 through RCA Records. According to the IFPI, The Best Damn Thing was the fourth top-selling album worldwide and Sony BMG's top-selling album of 2007. The album was certified platinum by the RIAA on June 15, 2007 and has sold over 7 million copies worldwide. The explicit versions of the album were Lavigne's first to receive a Parental Advisory label, shown on the limited and deluxe editions. Allmusic highlighted the album as one of the most significative punk-pop albums of all time, it also features "Girlfriend" as one of the most significative punk-pop songs.

The album was Lavigne's third consecutive #1 album in the UK Albums Chart and her second on the U.S. Billboard 200, as well as reaching the #1 spot in several other countries. The first single released from the album, "Girlfriend", reached the top of the charts in over twelve countries worldwide, including her first U.S. Billboard Hot 100 number 1 single. Four singles were officially released from The Best Damn Thing as well as the soundtrack single for the 2006 film Eragon, "Keep Holding On".

User Album Review
To while away the time before the arrival of Avril Lavigne's new longplayer, I imagined what the cover art might look like. In the end, I settled upon a reworking of Blondie's Parallel Lines with Lavigne taking up the Debbie Harry position, moody and 'tudey at the front. But instead of darkly besuited Blondie blokes in the background, stand a bunch of marketing bods, making percussion by clicking their Parker pens and printing out unit speculations.
But why'd I have to go and make things so complicated? It's hardly news that pop runs on bankable propositions. And if you're looking for the acceptable face of mass-marketed teen rebellion, Avril Lavigne beats the stripey socks off the competition. Let's face it, while there are mirrors in bedrooms and hairbrushes to be sung into, while The OC needs emotion-ridden soundtracks, we need teen rock.
So step up, Ms Lavigne. For, anyone who includes this amount of hand claps on a single record is OK in my book. The album kicks off with its first single release ''Girlfriend'', a piece of pep rally power pop which shamelessly drags Tony Basil's ''Mickey'' out of the crates and sets the standard for the rest of the record. Following this, the title track shakes its pom-poms with a 'give me an a-v-r-i-l' cheer. Later, ''I Don't Have To Try'' kicks off with the Peaches-like chant 'I'm the one, I'm the one who wears the pants. I wear the pants!'.
Alongside all of its bolshy, brattish choruses and boyfriend baiting, the album also offers surprisingly touching moments. ''Innocence'' features the endearing lyric 'This innocence is brilliant, I hope that it will stay... don't let it pass you by'. A rare oasis of calm amidst the stiletto-heeled frenzy that powers the album.
In all of its foot-stompin', hand-clappin' splendour, this parade of hollaback hymns to bad boyfriends, bad girlfriends and bad behaviour shows an Avril Lavigne who, on her third album, knows the secret to a great pop chorus and isn’t taking herself too seriously. The Best Damn Thing might be taking it a bit too far. If she'd consulted me, I'd have called it 'How I Stopped Worrying and Learned to Love Lavigne'.