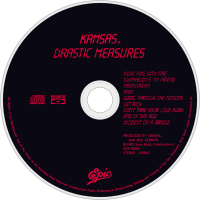 Drastic Measures is the ninth studio album by American rock band Kansas, released in 1983.
The shift in direction that Kansas took with Vinyl Confessions took its toll before recording began on this album. After hearing that Christian fans of Kansas were using lyrics from Vinyl Confessions in religious tracts and handing them out prior to the band's live appearances, violinist Robby Steinhardt grew tired of Kansas' new Christian affiliation and quit the band at the end of the 1982 tour.

Despite the success of Vinyl Confessions, both among mainstream and Christian audiences, the album was criticized in some quarters—especially by Rolling Stone—for being too repetitive of Kansas' prior efforts. Drastic Measures was new lead singer John Elefante's attempt to change that perception, and his compositions dominate the album, with Kansas co-founder Kerry Livgren only contributing three tracks. Because the sound of Drastic Measures is more akin to the successful records that Loverboy and Foreigner were putting out at the time, Livgren was greatly displeased. This is bluntly expressed in his lyrics for "Mainstream", which are as much a criticism of the band's new direction as they are a slam at the music industry in general.

With the exception of the last three songs on the record, any Christian lyrical content was mostly indirect and oblique, although this was primarily due to Livgren holding back a number of songs for his future projects. Combined with a strange choice for an album cover, the new Kansas presented on Drastic Measures confused long-time fans and disappointed Christian listeners. The album was the band's lowest-charting record since their debut in 1974 and the tensions within the band eventually became too much. Kansas officially disbanded after giving a New Year's Eve concert at the end of their 1983 tour.

Livgren and Dave Hope left the band to found AD, while Elefante went on to become a successful producer of Contemporary Christian music bands like Petra as well as a popular CCM performer in his own right.

One of the first rock videos (along with "Beat It" and "New Frontier") to be blown up to 35mm film and exhibited in movie theaters as a trailer, the music video for "Fight Fire With Fire," directed by Dominic Orlando, was released theatrically across the USA in 1983 as a short subject with Francis Ford Coppola's Rumble Fish. The song reached No. 3 on the Billboard Mainstream Rock Chart and No. 58 on the Hot 100.

The album was re-released on CD in remastered form in February 1996 on Legacy/Epic Records, then again in 2011.