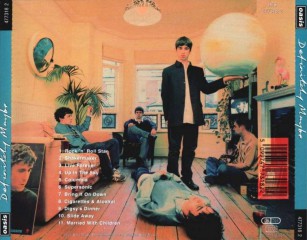 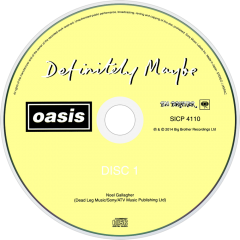 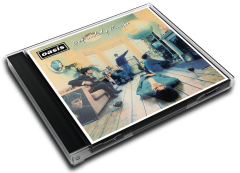 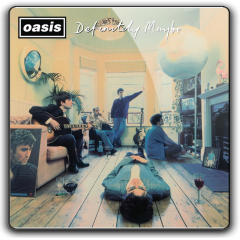 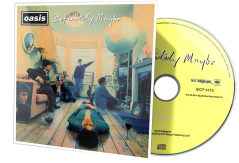 Definitely Maybe is the debut album by English rock band Oasis, released in August 1994. It was an immediate commercial and critical success in the UK, having followed on the heels of singles "Supersonic", "Shakermaker" and "Live Forever".
Definitely Maybe went straight to number one in the UK Albums Charts on initial release. It was the fastest selling debut album of all time in the UK when it was released and went on to be certified 7x Platinum (2.1 million+ sales) by the BPI. Definitely Maybe marked the beginning of Oasis' success in America, selling over one million copies there, despite only peaking at 58 on the Billboard 200. The album went on to sell over eight million copies worldwide and brought widespread critical acclaim.

The album, along with Blur's Parklife, helped to spur a revitalization in British pop music in the mid nineties and was embraced by critics for its optimistic themes and supposed rebuttal of the downtrodden fatalism evident in the dominant grunge music of the time. It was a seminal record of the Britpop movement and is still widely regarded as one of the greatest rock albums ever recorded, with it appearing in many 'best of' lists to this day. In June 2006, the NME named it as the greatest album of all time.

User Album Review
In August 1994, just a few months after Kurt Cobain killed himself (and the grunge movement that he'd become the reluctant figurehead of), Oasis’ debut Definitely Maybe was released.
To put this seismic attitude shift into perspective: Kurt’s working title for the final Nirvana album, In Utero, was I Hate Myself And I Want To Die. Definitely Maybe’s most popular song is called Live Forever.
So how did two punters from Burnage, an unremarkable area of Manchester, become so famous? Despite the fact that the second album, (What’s the Story?) Morning Glory, sold more copies and propelled them to tabloid superstardom and 10 Downing Street, the answers are all here.
The album kicks off with Rock ‘n’ Roll Star, which Noel has since said was the end of everything he wanted to say as a songwriter. He’s right in a sense, as it’s easily one of the greatest songs about being up on stage ever written. On arguably Liam’s greatest ever vocal performance he goads all-comers with: "You’re not down with who I am / Look at you now you’re all in my hands tonight." And that’s without even considering the attendant guitar riffs that snag your brain like barbed wire on your best jumper. If you’ve got a mate or relative who’s having a bad time of it, play them this, then watch them grow 10 feet tall and walk down the street like they rule the whole world.
Although at this point it’s easy to imagine the faces of every other British band of the time sadly searching the classifieds for a new vocation, there are still 10 more tracks left. How about Supersonic, a sky-scraping anthem about individuality adopted by the masses? Or Cigarettes and Alcohol, a brash T Rex paean to hedonism? Or Bring It On Down, a non-stop, no-messing punk stomp to certain death or glory?
It’s easy to trot out the tired argument that these Mancs don’t have the power of The Stone Roses or The Smiths because the songs don’t have the wistful, melancholic air that one comes to expect from songs emerging from that rainy Lancashire city. Is it true to say "It’s just Beatles songwriting with Sex Pistols attitude"? Maybe. But have these songs transcended the Conservative-greyed and Britpop-glossed years in which they became public property to become heroic, gigantic pop monuments in their own right? Definitely.