03) Take Back the City
04) Lifeboats
05) The Golden Floor
06) Please Just Take These Photos From My Hands
07) Set Down Your Glass
08) The Planets Bend Between Us
09) Engines
10) Disaster Button
11) The Lightning Strike: What If This Storm End 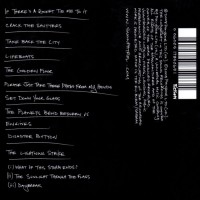 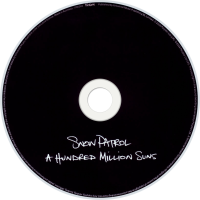 A Hundred Million Suns is the fifth album by alternative rock band Snow Patrol. The album was written by Snow Patrol and was produced by long time producer Jacknife Lee who has previously produced albums for Bloc Party, R.E.M., and U2. The songs were recorded through the summer of 2008 in Hansa Studios in Berlin and Grouse Lodge Studios in Ireland. The album was released in Ireland on 24 October 2008, on 25 October in Australia, on 27 October in the United Kingdom and the rest of Europe and in the US on 28 October.

User Album Review
In the epic trinity of stadium indie, Snow Patrol are the ghost; lacking both the sheer pomposity to challenge the all-powerful Coldplay and the catchy confidence to take on the often crucified Keane, they wisp about in the shadows, pushing out occasional strokes of excellence to remind the world they exist.
A Hundred Million Suns is their rabble-rousing attempt to change that power structure ”“ and they really have pulled out all the stops.
Decamping to the Berlin studios used by David Bowie and Iggy Pop in the late 70s and teaming up once more with the increasingly influential producer, Jacknife Lee, they have pushed every ounce of their energies into breaking free of their 'also-rans' tag and proving that they really can write an entire album of brilliance, rather than just the occasional stunner.
Inevitably, they have fallen short of such a goal ”“ not through lack of trying but because they simply don’t have the invention or imagination to be truly great.
Most surprisingly, given the saving graces of Run, Chasing Cars, Chocolate and It's Beginning To Get To Me on their previous two albums, there are no truly stand-out tunes - the album simply melts into one long agreeable but unremarkable mass.
That fact isn't helped by the lack of variety in their tunes. A Hundred Million Suns can be broken squarely into two camps ”“ the moody indie brooders and the up-tempo gut-wrenchers.
What's most annoying is that there are moments that could have been so much more fulfilling. The break of Crack The Shutters, for example, should have opened up an epic, rather than the drudge that follows it and the lo-fi minimalism of The Golden Floor could have revealed a Jose Gonzalez-like string to their bow, instead of the underwritten disappointment it actually gives.
A Hundred Million Suns is so close to being brilliant, it ends up being more grating than if it had been awful. A little more adventure, a little more heroism and Snow Patrol could have produced something stunning; as it is, this is stadium indie revealed through a glass darkly, a solid but ultimately unsatisfying experience.