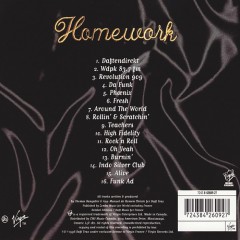 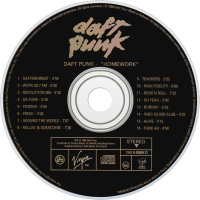 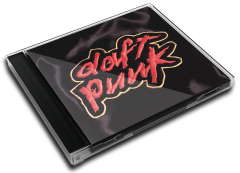 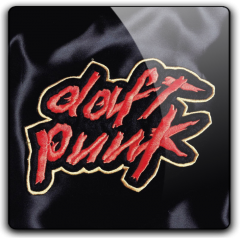 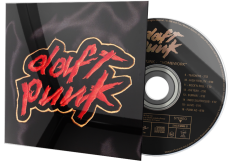 Homework is the debut studio album released by French electronic music duo Daft Punk in January 20, 1997. Considered a blend of house, techno, acid, funk and occasionally hip-hop, its success brought worldwide attention to French progressive house music and incited interest in French touch music, as several touch artists gained influence from Homework's style. According to The Village Voice, the album revived house music and broke free from the "Euro[dance] formula".
Critically and commercially acclaimed, Homework has sold over two million copies worldwide and received several gold and platinum certifications. The album featured singles that had significant impact in the French house and global dance music scenes. This includes the critically acclaimed and commercially successful "Around the World" and "Da Funk", which have been named among the best songs of their time.
The duo commented they had produced the series of tracks without an initial plan to release an album. As Thomas Bangalter stated, "It was supposed to be just a load of singles. But we did so many tracks over a period of five months that we realized that we had a good album." The album is included in the book 1001 Albums You Must Hear Before You Die.

Album Review
Even before they pulled a Kraftwerk and turned into robots, Daft Punk’s talent for mythmaking was as precocious as their production skills. They first passed a cassette of their music to Stuart MacMillan, co-founder of the Scottish techno label Soma, at a Euro Disney rave in 1993. Then, following the release of just two singles, Parisians Guy-Manuel de Homem-Christo and Thomas Bangalter were snapped up by Virgin and set to work on their debut album.
When Homework arrived in 1997, Britpop’s wane was too incipient to be detected and dance albums tended only to cross over into the UK’s guitar-centric mainstream if, as Leftfield, The Chemical Brothers and Underworld had shown, vocals were included to leaven all those repetitive beats. Perhaps it has something to do with Homework’s success, then, that one of its few vocal tracks happened to be Around the World, one of the decade’s catchiest singles.
The track is a perfect example of Daft Punk’s sound at its most accessible: a post-disco boogie bassline, a minimalist sprinkling of synthetic keyboard melody and a single, naggingly insistent hook. While the vocal performs that role on Around the World, elsewhere the same effect is achieved using a wide variety of sounds: Da Funk’s acidic wah-wah guitar line; the torturous squeal that powers the aural battery of Rollin’ & Scratchin’; a sustained fragment of guitar distortion carrying on the ocean breeze of Fresh; the woozy oscillations and slicing percussion of Indo Silver Club.
Just as distinctive as the less-is-more approach to each track’s elements is Homework’s love of compression, a sonic tribute to the FM radio stations that fed Daft Punk’s youthful obsessions. Such extreme use of attack and release, augmented still more by a predilection for filtered basslines and astringent hi-hats, establishes a distinctive tension between bass and treble that’s become as key to their sonic palette as their referencing of 70s disco, 80s pop and 90s techno.
Homework could have been a superb 40-minute album, but at almost twice that length there are definite longueurs. For every bagatelle like High Fidelity or PhÅ“nix, though, there’s a gleaming techno machine like Alive ready to hover into view and throw you forward into an LED-coated future of Kanye samples, Grammys, Tron soundtracks, movies and pyramids. The rise of the robots started here.