The Future Is Medieval 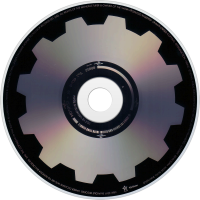 The Future Is Medieval is the fourth studio album released by English rock band Kaiser Chiefs. The album was made available through the band's official website on 3 June 2011, before being released in shops on 27 June. The album was later re-issued in North America, under the new title Start the Revolution Without Me. This version of the album was released on 6 March 2012, and includes the brand new track, "On the Run", plus tracks previously only available on the digital version of the album. Around the same time, a special limited edition vinyl box set was released through the band's official website in the United Kingdom, containing the entire twenty-three tracks from the digital deluxe version of the album, spread across four 10" vinyl records.
Just days before the album was announced, a music video for the track "Little Shocks" was released online via the band's official website. The album's title is taken from the lyrics of the track "Child of the Jago". The album was uniquely promoted in the United Kingdom, as copies purchased from the band's website from 3 June could contain a tracklisting chosen by the purchaser. Each album could contain ten of any of the twenty-three tracks available on the digital deluxe version of the album, and each individual album artwork could be edited to the purchaser's design. Purchasers could also share their version of the album, and for every other buyer who chooses to purchase their version, they earn Â£1.

Album Review
Leeds’ Kaiser Chiefs aren’t a band immediately associated with innovation ”“ their perky indie-pop has livened up many a festival with a series of "nah-nah-nah-nah-nah"-style nonsense, but their popularity has never been founded upon originality. But the five-piece have looked to a potential future for music distribution for their fourth album, allowing fans to compile their own version of The Future Is Medieval from their official website. What this means is that one buyer will receive a very different set to the next (you can even choose your own cover); and what it means for the reviewer is that their critical take might not relate at all to the reader’s experience.
Putting fans in control is very nice, of course (and the website interface is a lot of fun). But what does it mean for the band? Could they not decide between these 20 songs? The Future Is Medieval can’t be seen as any true statement, artistically, because the product is so flexible. This is not Kaiser Chiefs "doing a Radiohead" ”“ Radiohead presented a very definite release (with both In Rainbows and The King of Limbs), suitably sequenced by the makers themselves. Do the Kaisers care not for the album format? (Arguably, no ”“ they have always seemed a singles band first.) This is a mix-tape really, not a long-player in the traditional sense. And before listening to any of these tracks, the cynical can see its launch as a way of distracting from the diminishing returns of the band’s music over their three previous collections. Off With Their Heads? More like Get This Off My Stereo, Thanks.
Listen, though, and it does become clear that this is a new Kaisers in more than a servicing sense ”“ they’ve upped their creative ante somewhat, a number of these songs (assuming you pick the ‘right’ ones) coming across as more measured and mature, and a heck of a lot gloomier, than the upbeat bounce-alongs of old. Lead single Little Shocks goes some way to showcasing this murkier atmosphere ”“ where before there was shiny hooks, here the chorus doesn’t leap from the speakers and the whole piece swells with unexpected drama. Can’t Mind My Own Business is indie-pop trapped in a Tron cabinet, while Heard It Break is a sinister sibling of something The Human League might write. Starts With Nothing examines the transitory nature of fortune, of wealth monetary and emotional ”“ it’s rudimentary lyrically, but nevertheless a significant tonal shift for an act predominantly associated with anthems for football terraces. Child of the Jago claims, "This is your nightmare calling" ”“ not quite, but there’s no doubt that the Kaisers have been exploring their darker side, with some exceptional results.
The Future Is Medieval is impossible to review as an album proper, because it’s not. It’s what you make it, literally, and as a result it can be as good, or as bad, as the listener designs it to be. Personally, it seems like a great marketing exercise (or worse, given the rewards to fans for selling their own version, like street-teaming) rather than a memorable music event. Will it change how albums are made? Of course not ”“ artists already know that buyers will choose to download particular songs; all that’s different here is that you have to make that number up to 10 (although some will 'buy twice', downloading all of the songs available). Will it boost the Kaisers’ profile at a time when their stock’s at an all-time low since the breakout days of debut LP Employment? Absolutely, hence all of these words here. Which are worthless, of course, because this is not an album.