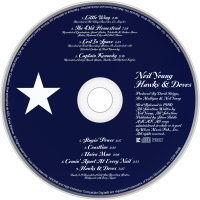 Hawks & Doves is the tenth studio album by Canadian musician Neil Young. Its two sides were recorded in different circumstances, side one being culled from sessions dating from approximately 1974 through 1977, and side two from sessions specifically for the album in early 1980. The record peaked at #30 on the Billboard Top Pop Albums chart in December 1980 in the US. It is also one of Young's shortest albums, its running time just under half an hour.
It was unavailable on compact disc until it was released as a HDCD-encoded remastered version on August 19, 2003 as part of the Neil Young Archives Digital Masterpiece Series.