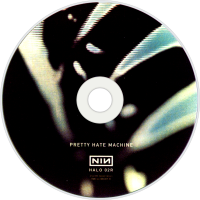 Pretty Hate Machine is the debut album by American industrial rock act Nine Inch Nails, released October 20, 1989, on TVT Records. Pretty Hate Machine is compiled of reworked tracks from the Purest Feeling demo, as well as tracks recorded after its recording. The album spawned three singles, the most successful being "Head Like a Hole", which has become a staple in Nine Inch Nails live performances.

The album became one of the first independently released records to attain platinum certification. On 12 May 2003 the Recording Industry Association of America (RIAA) certified the album triple platinum, denoting sales of three million in the United States. It was commercially and critically successful for an independent label, but Trent Reznor (Nine Inch Nails' only constant band member) feuded with TVT (the original publishing label of the album) during promotion. The album was out of print from around 1997 to 2005, due to the much publicized falling out between Reznor and the record label. Rykodisc re-released the album around the world in 2005, effectively putting the album back into print. A remastered version was released on November 22, 2010.

Slant Magazine listed the album at #50 on its list of "Best Albums of the 1980's" saying "Before attempting suicide in The Downward Spiral and living with the wrist scars in The Fragile, Pretty Hate Machine sent out sleek, danceable warning shots".