Track List
01) HYPERPOWER!
02) The Beginning of the End
03) Survivalism 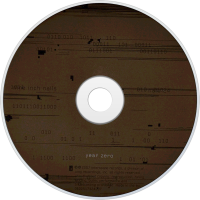 Year Zero is the fifth studio album by American industrial rock act Nine Inch Nails, released on April 17, 2007, by Interscope Records. Frontman Trent Reznor wrote the album's music and lyrics while touring in support of the group's previous release, With Teeth (2005). In contrast to the introspective style of songwriting Reznor used on previous records, Year Zero is a concept album that criticizes contemporary policies of the United States government by presenting a dystopian vision of the year 2022. The album is part of a larger Year Zero project which includes a remix album, an alternate reality game, and a potential television or film project. The Year Zero alternate reality game expanded upon the album's fictional storyline by using media such as websites, pre-recorded phone messages, and murals.

Upon its release in April 2007, Year Zero sold over 187,000 units in its first week, and it reached number two on the Billboard 200 chart. The album also received generally positive reviews, many of which were favorable toward the accompanying alternate reality game. Year Zero produced two singles, "Survivalism" and "Capital G", the latter released as a promotional single. Disputes arose between Reznor and Universal Music Group, parent company of Interscope Records, over the overseas pricing of the album. Year Zero was the last Nine Inch Nails studio album released on Interscope. In October 2007, Reznor announced that Nine Inch Nails had fulfilled its contractual commitments to Interscope, effectively ending the band's relationship with the label.

User Album Review
On Year Zero, Trent Reznor’s apocalyptic dream world becomes a cacophonous blazing reality. Like the repressed peoples forced into a life of fear in his envisioned near-future autocratic state, we are made subordinate to its insistent beats and arresting rhythms - the music is the master and we must take heed.
Reznor’s music defies simple categorization and this impressive offering doesn’t so much cross borders as to go on clandestine raids through the realms of electronica, industrial edged rock and even hip hop. Diverse sounds are layered into a musical collage that continues to evolve with listening time and creates an aural depiction of a planet ravaged by war, ecological destruction and social disintegration.
The fact that this is set in the future might seem incongruous, for some as these themes are alarmingly close to home and, many would argue, arrived long ago. It's amid this chaos of buzz bombs and heavy artillery that Reznor displays his rare ability to create melodic gems that take root in the subconscious and shine some light in the void. '‘Zero Sum'’ is a fine example and provides an introspective bookend to the opening battle marches of ‘'Hyperpower'’ and ‘'Survivalism’'. Impeccably produced and forming part of a wider campaign that has utilized the leaking of album tracks to the public and hidden codes and messages to be found by fans, Year Zero, is at once fresh, frightening and fulfilling.