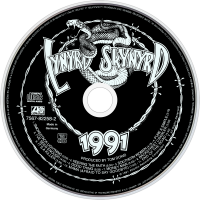 Lynyrd Skynyrd 1991 is the sixth studio album by American Southern rock band, Lynyrd Skynyrd, and is the first album with the new members of the band - Johnny Van Zant and Randall Hall - and the first to feature Ed King since Nuthin' Fancy, who replaced the three who had died since the band's last release - Ronnie Van Zant and Steve Gaines in the 1977 plane crash; Allen Collins in 1990 from chronic pneumonia.