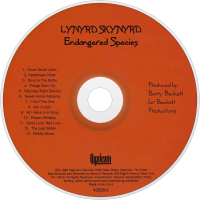 Endangered Species is the eighth album by the Southern rock band Lynyrd Skynyrd. It was released in 1994, and features mostly acoustic instrumentation, as well as Ronnie Van Zant's younger brother, Johnny, as lead vocalist. Many of the songs are Skynyrd's most known songs, with new material released alongside.